Postmarked West Point: A U.S. Postal History of West Point and its Graduates authored by Martin H. Joyce, recounts the history of the United States Military Academy at West Point, New York through postage stamps, postmarks, post offices named for West Point graduates and other postal history ephemera. It builds upon similar works, though much shorter in nature, published in Assembly, the journal of the West Point Association of Graduates (AOG), and La Posta: The Journal of American Postal History. These are described in more detail in the preface. 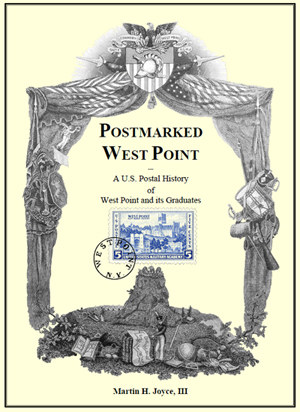 At latest count, twenty-eight graduates have appeared on U.S. postage stamps. This is believed to be the greatest number of graduates of a single US institution of higher learning to appear on stamps. The first such issue featured Ulysses S. Grant (Class of 1843) in 1886. Not surprisingly, due to his roles as both a Union Army general during the American Civil War, and later as U.S. president, Grant appears on more U.S. postage stamps than any other West Point graduate. Eisenhower (Class of 1903) is not far behind. Lesser-known graduates such as Montgomery Blair (Class of 1835), Postmaster General under Abraham Lincoln, and George Goethals (Class of 1880). chief engineer for building the Panama Canal, appear as well. Postmarked West Point includes brief biographies of each graduate, illustrated by the stamps featuring them.

The author, Martin (Jay) Joyce, is a 1974 graduate of West Point, and served six years on active duty. Jay began collecting stamps at about the age of ten, eventually becoming a “lapsed collector” during his working years, only returning to the hobby in retirement. The book reflects his renewed passion for the stories that postage stamps tell, along with a love for his alma mater.

Jay’s work is not intended to be a philatelic treatise – it is about storytelling. While specific stamps and postmarks may tell individual stories about people, places and events, Postmarked West Point pieces these small stories together into a larger, collective history. It is intended to promote appreciation for how philately – both stamp collecting and postal history – synergistically tells the story of our nation’s premier leadership institution and the Long Gray Line.

Postmarked West Point won a Vermeil Award for literature at the 2021 Great American Stamp Show, and is available in hard copy from Amazon. The digital copy available here has been updated since the book’s original publication in January 2021.

HERE for the PDF in your Browser.